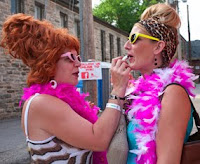 Once again, I'll be signing copies of Baltimore Betty at HonFest this year! I wasn't too sure if I'd be there or not, because the store that used to host me changed names/owners, and I wasn't even sure if they still carried Betty! Fortunately, they do, and I just confirmed that I'll be there to sign, so yay!

Look for me outside of HonTown, which is the old drugstore on the Avenue. It's right across from Cafe Hon, which you can't miss due to the giant pink flamingo on the building's facade.

Hope to see you there!
Posted by Carr-Toons at 4:44 PM No comments:

At the risk of spending hours sifting through thousands of comments on this post (Ha!), I'd like to throw a question at my readers. (Well, the one or two confused souls who accidentally stumble upon this blog once a year.)

I'm considering creating a Facebook page for Crabby and Hon. I hesitate to call it a fan page, because that would be putting it on the same level as someone with actual fans...like Justin Bieber. Really, it would be more of a feedback page. If people like the strip or dislike something specific they could post it there, or if they have ideas for future story lines...maybe I could even post previews of upcoming strips (if I'm allowed to do that...I'm just thinking out loud here.)

Anyway, for my very few followers, what do you think? Good idea/bad idea? I'm interested to here y'all's opinions!
Posted by Carr-Toons at 12:51 PM 2 comments:

The Baltimore Time Travel Anthology (which includes yours truly) was released last week. I don't have any awesome pictures, but the release party was held at Atomic Books in Hampden. It coincided with the release of SnoBaltimore, a new 'Zine about snowball stands in the Baltimore area. The party included free snowballs, animations, performances and cocktails. Everybody had a great time. Plus, they raffled off a copy of the anthology signed by all the artists!! I don't know who won it, but if I did know, I wouldn't mention it here because I don't want that person to worry about my hoards of readers breaking into his/her home at night to steal his/her precious signed anthology which is probably worth millions.

But I've already said too much! To protect the winner of the signed anthology, I've provided a link where you can get your OWN copy of the anthology! How cool is that? Quick! Click here and be transported back in tiiiiiiiiiiiiime!
Posted by Carr-Toons at 12:41 PM No comments:

As usual, I apologize for not posting as often as I should. That being said, I've still got a few hours left of May, so here's what happened this month. (And yes, I realize that it would have made sense to promote all of this beforehand.)

Free Comic Book Day took place on Saturday, May 7. It went really well this year and oddly enough, I sold more copies of Baltimore Betty than I have in the last several years...could this be a sign of economic recovery? Only time will tell!

Me sitting at my signing table. Unfortunately Greg Cox and the other signers weren't able to make it this year.

But Keith and Jams made it! (As did Donna, John and Justin.)

Promotion for FCD and the cartoon I did for that Friday's Record. I included the owner of Washington Street Books/longtime friend, John Klisavage.


You can read more about Free Comic Book Day here. Remember, it's the first Saturday in May at comic book stores around the country. If you missed out this year, mark your calendar for the next one!

Also, I think I'm going to break this recap into three posts. It'll make it look like I've accomplished more. Ha!
Posted by Carr-Toons at 12:33 PM No comments: