Microsoft Word is not a design program. It's a word processing program. That's why it's called Word.

If it were a design program, it would probably be called Design...or, I dunno, InDesign. Maybe even Quark.

But yeah, Word is not a design program. So don't ask people to design in it.
Posted by Carr-Toons at 8:59 PM No comments:

So every year, the Maryland Wine Festival hosts its annual Wine Festival Poster contest. I was planning on entering this year, and I spent the past weekend coming up with a design, but then I realized how cracked-out it was and decided not to submit it. 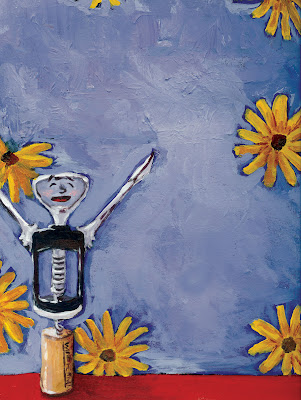 Obviously it's not finished, but...yeah. It's a corkscrew man. And he's all psyched 'cause he just opened a bottle of wine from the wine festival, and now he's about to par-tay. And in the background are Maryland's flower, the black-eyed susan.

I don't think the Maryland Wine Festival would ever go for something like that. I could be nice and say it doesn't fit the tone of the event, or I could be honest and say they always pick work that looks like it was created by Grandma Moses because anything else would rock their fuddy-duddy socks off. 'Specially a corkscrew man.

Oh, btw, the deadline's this Friday if you wanna enter something that sucks. You might win $1,000!
Posted by Carr-Toons at 8:39 PM No comments: