Well, this is a blog about cartooning and my opinions and sometimes politics, so I guess I would be remiss if I didn't say something about the NY Post monkey cartoon.

If you haven't had the misfortune of seeing it, here it is: 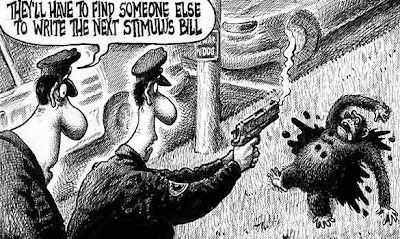 A lot of people are pissed off about this cartoon, because they feel like it's racist. I can definitely see how it can be intepreted it that way, but I seriously doubt that was the cartoonist's intention. (Granted, Delonas doesn't have the greatest track record.)

That's not to say the cartoonist should get off the hook. I understand that when you're working under a tight deadline, you might not have the time to sit and consider every possible way a cartoon can be interpreted, and since you're dealing with images and not words, things can very easily be misunderstood. But for something like this, when it's very obvious that people (not to be confused with politicians, haha) are hurt and offended by what you've done, it's not good enough to sit there and say "Well, you're stupid because you don't understand my cartoon and I'm not a racist and that's not what I meant and blah, blah, blah." You need to apologize. And you need to be sincere about it.

I don't agree that Delonas should get fired, but that's mostly because I doubt that the Post would hire a new cartoonist to take his place. I think this is a great example of how powerful and important cartoons can be. It saddens me that someone who is fortunate enough to have a staff editorial cartoonist position would be so careless with his work, but like I said, mistakes happen. I'm also bothered by the fact that whenever a cartoonist or a cartoon gets in the news, it's because of something negative. And never that edgy, thought-provoking negative that cartoonists strive for.

It annoyed me so much when the Obama New Yorker cover got so much attention. 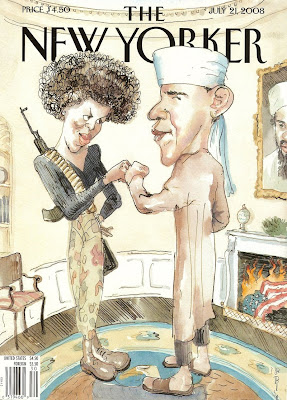 Since when is the New Yorker the go-to place for political cartoons? Satire just isn't their thing. So many people called it failed-satire, but I think it just wasn't the right venue for that kind of commentary. Had that been the cover of MAD Magazine, it would be a totally different story. I don't think the cartoon itself was bad, I just think it was a weird choice for a New Yorker cover.

The NY Post monkey cartoon IS failed satire. I get the concept, it wasn't particularly clever or funny, so just apologize for doing a stupid cartoon.

That being said, I wish people would write to their papers and praise good cartoons. Maybe instead of coming off as a liability, cartoons could once again be seen as an asset. Imagine that!
Posted by Carr-Toons at 8:37 PM